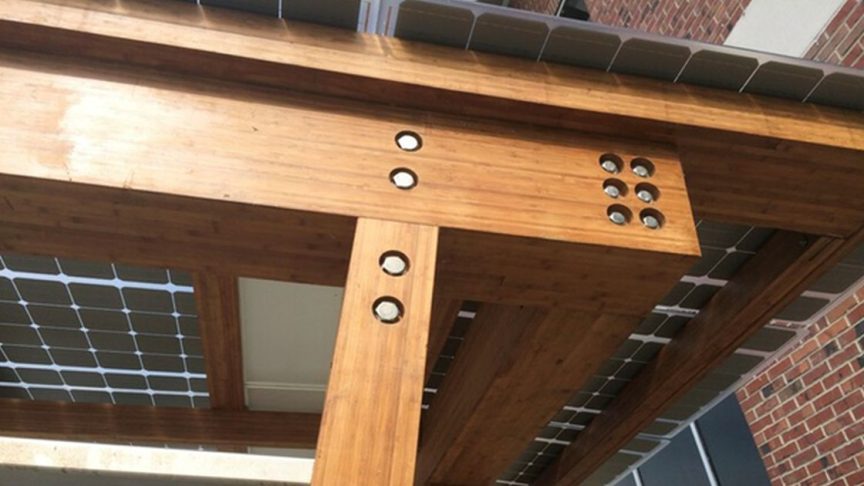 Pretentious as it may sound, we can say with certainty that bamboo is one of the most promising materials for the future of the construction industry. Neil Thomas, principal engineer at atelier one, says that if we were to design an ideal building material, it would look a lot like bamboo. This is because it grows very fast, is present in many countries around the world, has a highly efficient cross-section, and has impressive load-bearing strength.

But beyond its structural use in its raw form, bamboo is also a material that allows a high level of processing and can be laminated for flooring, fixtures and, as we will see in this article, for Structural Engineered Bamboo (SEB) structures, which are very similar to Engineered Wood. We spoke with Luke D. Schuette, founder and CEO of ReNüTeq Solutions, LLC, a company in St. Louis, Missouri, that has been working with this structural material technology.

Engineered bamboo is made from raw bamboo culms, which through pressure and heat form a laminated composite that is then glued together to form structural parts. In Renüteq’s case, the slat preparation process and the finished product are patented specifically for structural building applications, called Radial Laminated Bamboo.

RadLam® optimizes the highest performance fibre of the culm by removing the lower strength fibres from the inside of the culm slat before lamination takes place, while increasing the efficiency during production by reducing waste. The main applications of SEB are structural systems (columns and beams), structural glazing systems for buildings (for entrances, roofs, façade systems), as well as curtain walls and floor-to-ceiling frames.

Although the uses are similar, according to Luke, “from a structural standpoint, SEB is much stronger than any Mass Timber on the market. The Modulus of Elasticity of ReNüTeq’s SEB is more than 4 million PSI, which is more than twice the strength of any engineered or glulam timber product. In tension, it is more than 10 times stronger due to the continuous silica fibre content throughout bamboo. The higher density of SEB is ideal for connection design as timber fibre will crush within bolted connections, whereas this maintains its form under higher compression.”

Because it is 40% denser than engineered wood, it also means that bamboo structures have significantly better fire performance than wood, because its carbonization rate is much slower. “Bamboo, at its cellular level, is more closed than timber fibre which makes it much more stable in moisture and temperature changes. SEB is more than 28% more stable than Mass Timber in volatile conditions, making it optimal for both structural and glass systems.“