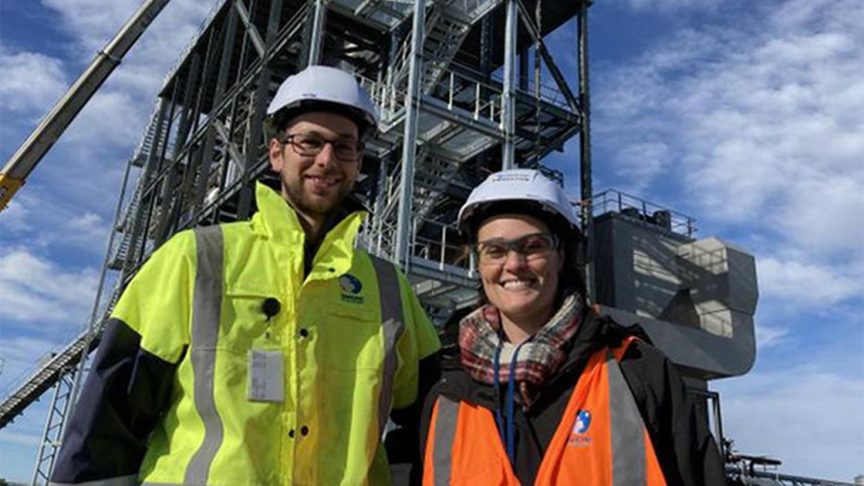 Progress on the new plant was fairly advanced, he said. A Danone spokesman said the plant would need 35,000 tonnes of sustainable wood fuel per year; that is four to five 30-tonne truck-and-trailer units per day to make its infant milk formula.

The new boiler, expected to release its first head of steam in the next few months, would run on hog fuel, a type of biomass fuel made from chopped-up, unprocessed waste debris, bark and organic matter, which came from commercial forestry. Brewerton said Azwood would also be distributing a range of wood fuels to its other Otago clients and would employ about five full-time staff at the new facility.

The Bioenergy Energy Association of New Zealand, to which Azwood is accredited, had long identified Otago as the ideal growing environment for wood fuel, with at least 125,085ha of planted production forestry in the region to feed the growing biomass industry.

Danone biomass boiler project engineer Ben Fisher (27), of Wellington originally, was representative of the diverse team working on the NZ $30 million boiler, which had brought in expertise from all around the world. Having grown up in the suburbs but having a keen bent for sustainability in engineering, he was enjoying the rural isolation of Clydevale and abundant forestry.

“We partnered with Azwood, a local company that makes biomass fuel. The fuel needed to be sourced from sustainably-managed forestry within a 50km range of the site. It is mostly radiata that is grown here, but so long as it is coming from a sustainably managed forest it can be used as fuel in our boiler.”

“The wood has to be local because of sustainability,” Danone’s sustainability communication and stakeholder relations manager Helene de Laguiche, said. “Up until now we’ve run on lpg. Five years ago, we started looking at cleaner energy, and wood-burning energy because of the availability in New Zealand was the obvious choice.”

“In Europe, bio-ash, what was left over from burning, was put to use. “There is a very niche market in New Zealand with opportunities to use it, for instance, in roading, but also in cement and compost. Once our biomass boiler is running, we will analyse the bio-ash produced from the boiler and look for the most appropriate way to repurpose it locally.”

The quality would need to be tested, but was definitely something to consider for the future “to complete the sustainability cycle of biomass”. Overall, the transition to biomass at Danone would create about 10 additional jobs from supply to extra staff to feed the boiler.

The Finnish-made boiler was manufactured by KPA Unicon and the only one of its type in New Zealand. It was tailor-made for the operation at Danone, which would be the largest dairy plant to run solely on biomass in New Zealand.

Danone NZ is also leading the way within Danone, behind its Brazil and Ireland plants, which have already reached the absolute carbon-neutral goal. “It’s about sharing knowledge and creating partnerships with other industries,” De Laguiche said. “There’s no secrets. It’s not something that we would want to keep to ourselves.”