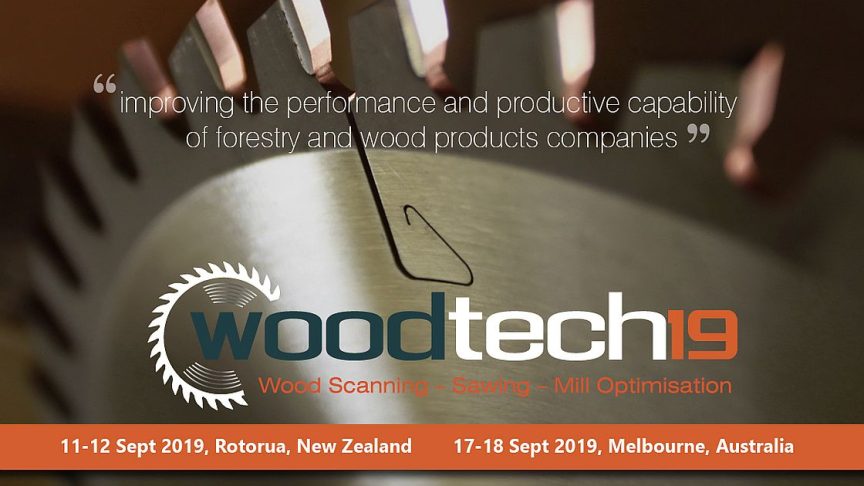 The two-yearly technology update for sawmilling companies in New Zealand and Australia is being planned with local industry and key technology providers. It runs in September 2019. Record numbers attended the last event in 2017 and exhibition spaces sold out at both venues. 2019 plans to be even better. Mark the date now into your diaries. Early expressions of interest (EOI) are now being sought for those who’d like to present at this years’ series.

Background: The WoodTECH series was reintroduced to Australasian sawmilling and wood manufacturing companies in 2017. After a decade of national training programmes falling over, saw-doctors groupings folding, mill closures and consolidation within the industry, local wood producers were keen on getting their teams together again at one central location. An independent forum to learn about new technology, new processes and systems, to exchange ideas and to network was being called for.

That’s where the Forest Industry Engineering Association (FIEA) stepped in. This had been a core component of their technology related events in the past. The WoodTECH series was set up with local industry and key national and global technology providers.

The WoodTECH 2017 technology series focussed on sawmilling or green-mill operations. It drew in a record number of over 400 delegates in September 2017. It was the largest gathering ever seen of sawmilling companies, saw-doctors and technology providers in Australasia. WoodTECH 2018 achieved similar support with the focus being on dry-mill or wood manufacturing technologies. Details of both events can be found on the WoodTECH 2019 website.

What’s going to be covered?

Again, an independent platform will be provided in both New Zealand and Australia for local companies to evaluate new innovations, technologies, processes and systems in sawmilling, scanning, saw maintenance and mill optimisation. Practical troubleshooting, maintenance, QC, saw alignment, training and recruitment sessions are also expected to be built into the two-day programme with short presentations, workshops, trade exhibitions and tech talks being planned.

So, if you would like to be considered as a presenter (you’d like to talk about new technology, systems or practices that are being employed which are making a real difference to a mills profitability or productivity, troubleshooting tips, case studies … please contact brent.apthorp@fiea.org.nz BEFORE Friday 1 March.