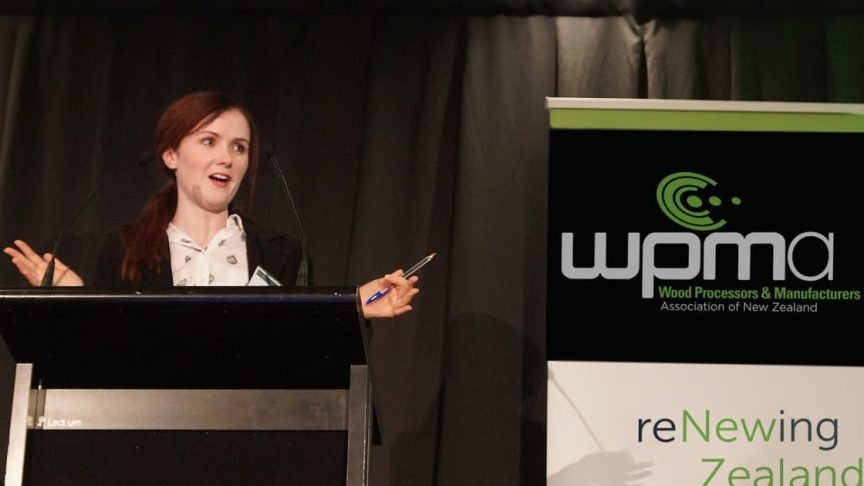 “Manufacturing still matters,” Dr Alison Pennington (photo) told delegates at the Wood Processors and Manufacturers’ Association (WPMA)’s conference in Christchurch recently. Dr Pennington is an economist at the Centre for Future Work within the Australia Institute, and was a keynote speaker at the conference.

“Manufacturing drives innovation,” she explained. “It continues to open new frontiers in innovation and technology, and invests proportionally more in research and development than any other sector. Besides, no sector can even apply innovation without including manufactured goods!” Most scientific discoveries could not have been made without manufactured microscopes, for example, nor could forestry be as efficient without factory-manufactured machinery.

Manufacturing is not a sunset industry, she believes – international experience shows that this sector can still expand in developed countries of a similar size to our own (think Ireland, Korea, or Chile for example) and our labour costs are lower on average than theirs. Manufacturing can also deliver nationwide spill-over benefits such as increased productivity, innovation, income and exports.

“Manufacturing is the dominant component of all international trade,” she said, “yet New Zealand’s loss of manufacturing has harmed your economy more than that of other countries,” helped by our current enthusiasm for a “knowledge economy.” Historically, wood manufacturers have had little Government support to compete cost effectively on the world stage, and this has had particularly serious consequences for New Zealand’s regions.

According to OECD and national statistical agency figures, New Zealand’s job numbers in manufacturing have dropped two percent since 2010, while the OECD average is a seven percent increase. Some of that decrease can be placed at the “definitions” doorstep, however – support jobs that used to be part of the manufacturing sector have been outsourced and defined as “services.”

New Zealand’s exports as a percentage of GDP have also been steadily decreasing. From approx. 32 percent of GDP in 2010, exports had dropped to 26 percent by 2017 (the latest figures available from Stats NZ, Infoshare and National Accounts) – showing that “free market” policies haven’t helped the manufacturing sector especially.

New Zealand’s manufacturing sector decline had been caused through a failure of political will rather than economics, she said, and did not need to be inevitable. A modern manufacturing policy could still ensure manufacturing makes a better contribution to our future prosperity, but time is running out. To ensure New Zealand gets its fair share of the international trade pie, an effective Government policy is an area in need of urgent attention and development.

Global experience shows that Government policies play a key role in fostering innovation, nurturing clusters and growing demand. “People don’t work with their bare hands anymore,” Dr Pennington pointed out. “Manufacturing is integral to all production, and always will be.”

She believes the secret to expanding trade is to “use materials you already have, but perhaps change how they’re delivered.” To maintain cost competitiveness, Dr Pennington suggests New Zealand needs to prevent over-valuing our exchange rate and maintain strong productivity growth.