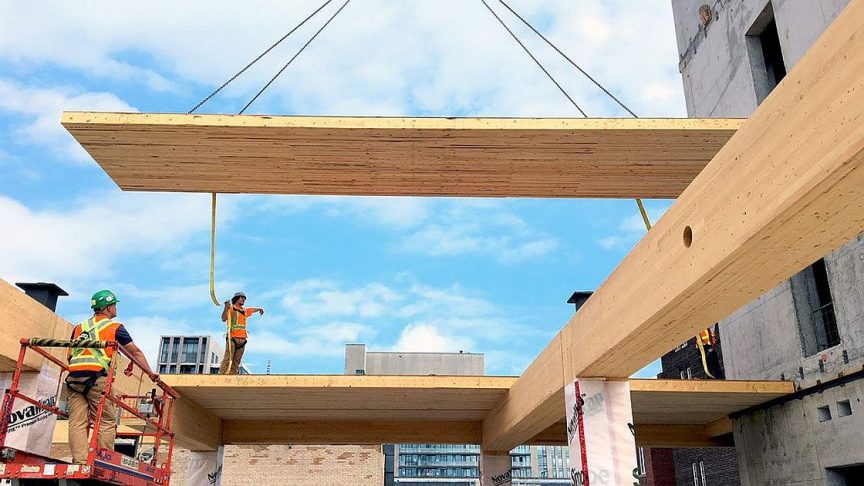 With several installations under its belt, Timmerman Timberworks Inc. has opted to automate fabrication of nail-laminated timber (NLT) panels. The firm, based in New Lowell, Ont., is reportedly the only company in Canada to have done so. It is currently installing panels at 80 Atlantic Ave. in Toronto, the first new timber-frame commercial building to be constructed in the city in a generation.

“Fabricating NLT panels by hand is quite labour-intensive,” says Timmerman president Michael Krans, who co-founded the company in 1999 with his brother Henry. “And much of the work is repetitive, so automating the process makes sense from a cost-of-labour perspective. Knowing that we had 80 Atlantic to build and other projects in the pipeline, we felt we had enough work for the machine to justify the significant cost.”

The machine, housed at Timmerman’s 20,000-square-foot plant at 2 Greengage Rd., nails the laminations into place at a rate of 12 nails per second. An entire panel can be fabricated in as little as 45 minutes. Timmerman can manufacture as many as eight NLT panels per day in dimensions of up to 10-feet by 50-feet. An estimated 200 NLT panels will be installed at 80 Atlantic. Installation is expected to be completed by early December.

While not yet in widespread use in Canada, Krans said NLT is in fact growing in popularity. He noted the product has been installed more often on the West Coast than in Ontario. Krans said he believes the release last year of a NLT Canadian design and construction guide will help pave the way for more such projects in this country.

“The technical detailing will vary from project to project, but having the guide gives architects and engineers a good design baseline and the confidence to specify the material,” he explained. The guide was co-edited by architecture and design firm Perkins+Will and structural engineering firm Fast + Epp, the same team that produced a similar guide for the U.S. building industry.

Krans, whose firm also fabricates cross-laminated timber (CLT) and other heavy timber components, said the wood construction market has really grown over the past three to four years on the commercial side. “We credit this to the growing popularity of new types of mass timber, specifically CLT and NLT,” he said. “But it is also due to the fact that people are starting to realize that building with mass timber makes sense.

Photo: A nail-laminated timber panel is hoisted into place at the 80 Atlantic Ave. site in Toronto’s Liberty Village. Installation of the panels is scheduled for completion in early December. The project is the first new timber-frame commercial building to be constructed in the city in a generation.