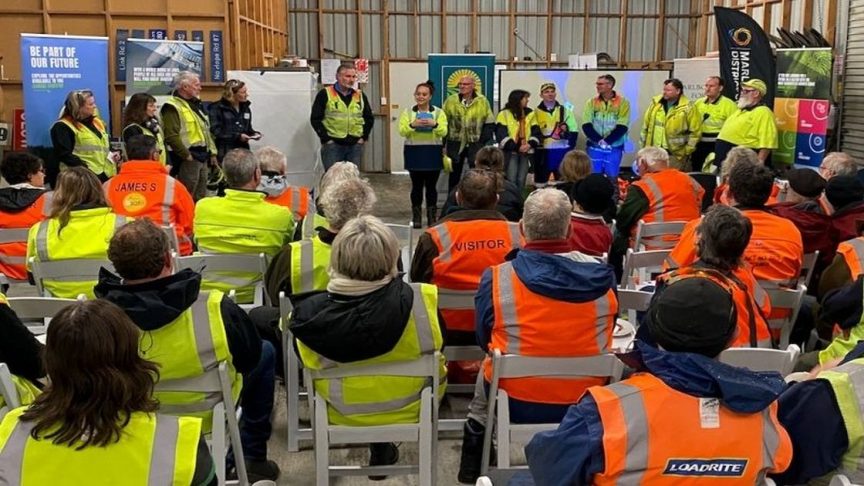 Kaituna Sawmill opened its doors to the New Zealand Minister for Climate Change, the Hon James Shaw, and 50 guests as part of a Cawthron Marlborough Environment Awards field day on 17 August.

The sawmill’s 46 percent reduction in its greenhouse gas emissions over the past 10 years and its reduction of its carbon footprint by 934 tonnes of carbon dioxide equivalents per annum were just two of the sustainability achievements which led to it being named as the winner in the forestry category at this year’s awards.

The Cawthron Marlborough Environment Awards are held every two years and attract entries from businesses and community organisations around the region. Category winners share their knowledge and experience through a series of public field days. The Kaituna Sawmill event was the second in the series which runs through until November 2021.

Visitors to the field day listened to OneFortyOne Environmental Planner Kristie Paki Paki as she outlined the background to the sawmill’s award entry, beginning with the sawmill starting to measure emissions 10 years ago.

She described how a substantial NZ$8 million investment in a Polytechnik biomass-fired energy centre in 2017 allows the sawmill to burn wet sawdust to generate energy to dry its timber products. Previously the sawmill spent more than half a million dollars per annum to buy waste oil to use as its fuel source. Using the Polytechnik enery centre has resulted in cost savings, increased productivity and quality improvements, said Paki Paki.

Minister Shaw said that he was surprised to learn how much the sawmill spent on fuel (waste oil) before it bought its Polytechnik system and was very impressed by the efficiency of the whole sawmill operation. “It’s really quite astonishing technology and there’s such a commitment to utilising every part of the resource during the process,” said Shaw. The Minister also commended the use of waste on site. “It’s tremendous waste capture and there is further potential and that’s really exciting because all that waste can be turned into value. Biochar has tremendous carbon capture potential.”

Visitors to the field day were positive about what they saw during their tour. “I was really impressed with the health and safety on site and the efficiency of the operation,” says Forest and Land Use Advisor for Te Uru Rākau, Tamara Orr. Sustainability Manager for White Haven Wines Josh Barclay said that he didn’t expect the scale of the sawmill operation. “It demonstrates the process of continual improvement really well,” said Barclay.

Chair of the Cawthron Marlborough Environment Awards Jo Grigg said that she was struck by how measuring its emissions was the starting point for the sawmill’s journey and hoped other businesses and organisations would be encouraged to do the same.

Awards judge Ket Bradshaw told the gathering that Kaituna Sawmill’s continuous improvement and its genuine desire to reduce emissions was clear in its award entry. “It stood out amongst other forestry entries because of the business’ reach and integration. Keep sharing your stories with neighbours and the public, it’s an important part of your licence to operate.”

“While we have a resource consent for half a million log tonnes per annum, we are currently only doing 150,000. Our chip and excess sawdust also represent real opportunities and we are always interested in collaborating to achieve value and reduce waste.”

Minister Shaw commended Goss and his team for their leadership. “If we could transfer this around the rest of the industry and other industries, we would be a long way down the path of reducing emissions,” said Shaw. “We know where we want to be and where we are now but we can’t quite figure out how to get between the two. Kaituna Sawmill and the team show us a pathway.”

Mt Gambier sawmill to be sold

The world’s most sustainable building panels?