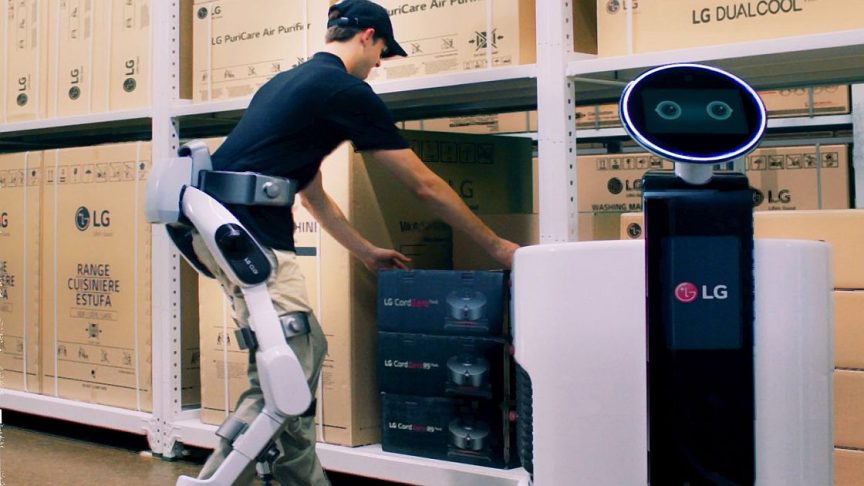 At the IFA in Berlin this week, LG is set to unveil a “wearable robot” exoskeleton designed to help workers take the load off their legs. LG has been pushing the robot angle hard lately. Last year the electronics company released robots to help out at home and in public places like airports, and earlier this year it followed up with the CLOi lineup to serve visitors in hotels and supermarkets.

The new lower-body exoskeleton also bears the CLOi brand. The LG CLOi SuitBot consists of a pair of robotic legs that a user can step into to augment their own, making it easier to stand, walk and work. The aim is to reduce physical strain and risk of injury for people who are on their feet all day at work.

The SuitBot has sandal-style shoes designed to be easy to slide your own feet into, and will automatically adjust to individual users. LG says it’s comfortable and has joints that rotate in a natural way. It’s also packed with artificial intelligence to let it learn and get better at its job over time, by analyzing data from the user and the environment. Taking that into account, the SuitBot can apparently suggest the best movements and stances.

Of course, it’s not the first example of this type of technology we’ve seen. Honda has been err, treading the exoskeleton path for some years, while California startup suitX has a non-motorized exoskeleton called MAX for industry use, as well as the modular Phoenix designed to restore mobility to people with disability. Companies like Lockheed Martin have also been tinkering with supportive devices for soldiers.

For local wood processors or manufacturers, the good news is you don’t have to be at the Berlin show this week. In just two weeks’ time, local companies who will be attending the upcoming WoodTECH 2018 series, will hear from Dr. Kazerooni, the founder and CEO of US Bionics and SuitX, the California-based robotics company which designs and manufactures medical and industrial exoskeletons.

Dr Kazerooni is also a professor in the Mechanical Engineering Department at the University of California, Berkeley and director of the Berkeley Robotics and Human Engineering Laboratory. In 2005 Dr. Kazerooni also founded Ekso Bionics, which brought to the market his lab’s earlier exoskeleton products.

Dr. Kazerooni has won numerous awards, including Discover Magazine’s Technological Innovation Award and New York Times most innovative technology of the year. He is an internationally recognized authority on robotics and world leader in exoskeletons.

Local wood manufacturers for the first time will get a unique look into the options for harnessing exoskeletons for their workforce. Already close to 300 have registered for the upcoming WoodTECH 2018 series. Late registrations can still be made on the event website, woodtech.events.