WoodTECH provides a unique independent platform for Australasian companies to evaluate the very latest wood scanning, sawmilling equipment and mill maintenance tools from around the globe

WoodTECH 2015 | Event Summary
WoodTECH 2015 saw record numbers of Australasia’s sawmilling companies and local and international tech providers turn up. Details of those key suppliers from around the world involved in the series can be seen below. Two two-day events, one in Melbourne, Australia and the other in Rotorua, New Zealand ran with over 350 participating in the technology series run by the Forest Industry Engineering Association (FIEA).

To remain internationally competitive, local sawmills increasingly had been looking at tools and technologies that can be used to increase lumber yields, improve grade recoveries and get higher production speeds out of their saw-lines. Lowering the service or maintenance requirements of equipment and reducing the sawing costs for their operation was also high on the list of “must haves”.

Sawmillers in the last few years, with consolidation amongst both producers and equipment suppliers, increasingly were working much more closely with their technology providers. The last couple of years had seen the development of some of the most sophisticated sawing technologies and saw designs seen in recent times. WoodTECH 2015 provided a rare insight into some of these new developments for local mills.

As well as new innovations around sawing and wood scanning systems, case studies of companies investing and bedding in some of this new equipment was a key focus for the FIEA event. There was also a much greater emphasis on the practical issues around selecting, installing, commissioning and running saws. Renowned sawmilling experts from around the world led sessions on how saws within the mill are best aligned, maintained and operated to improve both sawing performance and a mill’s productivity.

Some of the trends being projected for future sawmilling were; simpler, high production mills with reduced manufacturing cost replacing complex mills, single pass sawmills becoming more commonplace, high speed 4 sided canters with multiple profilers and vertical arbor gangs were expected to process the majority of the wood under 400mm in diameter and high speed edgers were increasingly expected to be replaced by high speed board profiling. 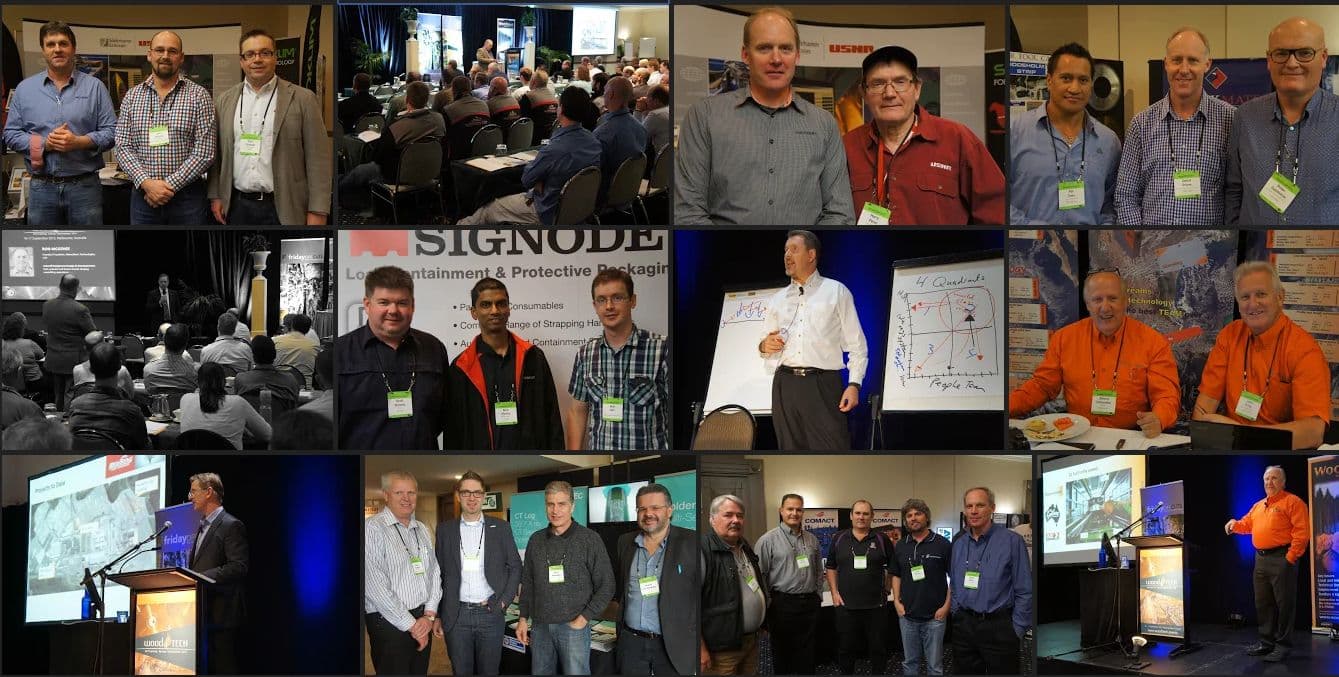 Click here to view 2015 Gallery
Technology wasn’t the only emphasis for WoodTECH 2015. As well as new equipment, the environment in which the production team is working and interacting is a critical part of working smarter. From reconfiguring production lines in the mill through to finding faster ways to identify and reject unacceptable products, the returns through the power of the “team” are significant.

For the first time at a sawing event, teamwork – harnessing the collective power of saw-doctors, maintenance teams and production personnel on site was explored in depth. For the final session on both days the FIEA team turned the emphasis onto the most important resource – people working in the mill or within the company. On hand to look deep inside the subject of peoples’ performance was a keynote speaker from British Columbia, Steven Falk.

Across BC, Steven had used his ‘Switchback’ system with people from all walks of life to help build better teams. He and his team of facilitators had gained a reputation for listening to people and helping them to change. Their techniques have helped people go from non-communicative into top-performing team members. As a result, they had made huge improvements among teams working in mills and forests throughout western Canada.

As well as record attendances by sawmilling companies throughout Australasia, support and involvement from leading technology and equipment providers at WoodTECH 2015 was outstanding.

Key companies who exhibited at WoodTECH 2015:

The New Zealand and Australian wood processing industry, including: