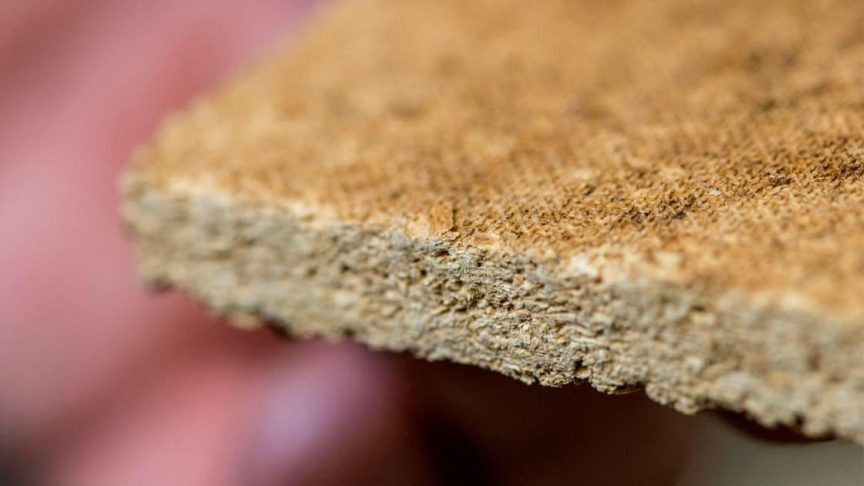 The University of Maine has been issued a patent for a process to create construction materials that are bound with cellulose nanofibrils (CNF) and offer increased durability and environmental friendliness.

While the technology can be used to create a variety of commonly used building materials, the primary application for this patent focuses on a replacement for particle board, which is used widely in furniture and countertops.

Particle board is traditionally manufactured from wood chips bound with a synthetic resin that typically contains formaldehyde, which is classified as a known human carcinogen. Off-gassing is cited by the EPA as the primary method by which people are exposed to formaldehyde, and pressed-wood products represent a common source of off-gassed formaldehyde in homes.

The process developed by UMaine researchers eliminates the use of formaldehyde as a binding agent, replacing it with a CNF slurry. The resulting product tests higher for fracture toughness and sequesters carbon and oxygen into the building product for its life span — typically decades.

The UMaine inventor is professor of chemical and biomedical engineering Doug Bousfield. Co-inventor is Michael Bilodeau, the former director of UMaine’s Process Development Center (PDC), a commercial-scale pilot plant on campus devoted to pulp and paper research and development. Mehdi Tajvidi, associate professor of renewable nanomaterials, also is a leading UMaine researcher in this area and is developing related technology as part of P3Nano, a public-private partnership founded by the U.S. Endowment for Forestry and Communities and the U.S. Forest Service.

“CNF technology could transform the way we make not only building materials, but a host of other products,” says Bousfield. “Particle board is only one potential application – a similar process could be used to create composite fiber board for insulation, cements, and even paint. We are also researching alternatives to single-use plastics for applications such as food packaging, drink lids and utensils.”

UMaine’s PDC is the only publicly accessible facility in the United States that can manufacture CNF at a rate of one ton per day. The center supplies CNF and cellulose nanocrystals (CNC) to academic, public and private research groups interested in evaluating and developing applications for these materials, and UMaine is a global leader in related research. The university also is a partner in FOR/Maine, a cross-sector collaboration between industry, communities, government, education, and nonprofits that seeks to innovate and grow Maine’s forest economy.

“UMaine’s ongoing research and technology development in this area is critically important to the forest sector here in Maine,” says Steve Schley, chair of the FOR/Maine executive committee. “Cellulose nanofibrils can be refined from wood waste products and any innovation that expands their use contributes to the full utilization of a renewable local resource and supports one of Maine’s traditional industries.”

The University of Maine is actively seeking a development partner for the technology. The patent number is U.S. 10,695,947.