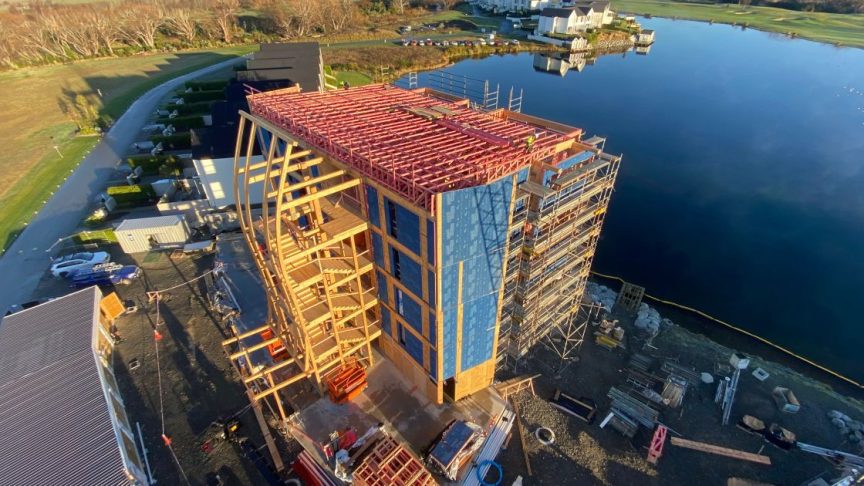 Surging interest in sustainable construction has seen one of New Zealand’s oldest mass timber businesses combine with one of the youngest. After 64 years in McIntosh family ownership TimberLab Solutions has joined the Red Stag group following a share sale completed last week.

TimberLab has been the company behind many of the iconic large-scale glulam and laminated veneer lumber projects in New Zealand’s history. The company also has a significant portfolio of impressive projects internationally. Recognising the need from external investment to develop and grow TimberLab, discussions were initiated with Red Stag in late 2021.

“The purchase of TimberLab was a logical fit”, says Red Stag group CEO Marty Verry. “In many ways, it brought the missing pieces of a puzzle that Red Stag has been building over the last two decades.”

Red Stag runs the country’s largest sawmill, Cross Laminated Timber (CLT) factory and a frame and truss operation, whilst TimberLab brings mass timber glulam, LVL and CLT capacity and expertise. Whilst TimberLab has been operating in Auckland since 1958, Red Stag only opened its CLT factory in Rotorua last year.

“The merger allows Red Stag to get a jump start on its growth path by combining two very capable teams and leveraging off TimberLab’s long history and institutional knowledge in the mass timber space.

“This is an exciting merger for the New Zealand building design and construction community,” adds Verry. “It means building designers and developers will be able to work with a single source for the entire building structure, and benefit from early supplier engagement to fully optimise the engineering of wooden structures to maximise advantages. This will make design and supply far simpler and more efficient than dealing with multiple suppliers.”

Verry says the group is seeing strong uptake of mass timber, driven by the desire by government and private developers to address climate change and build sustainably.

The name of the company will become ‘Red Stag TimberLab’.