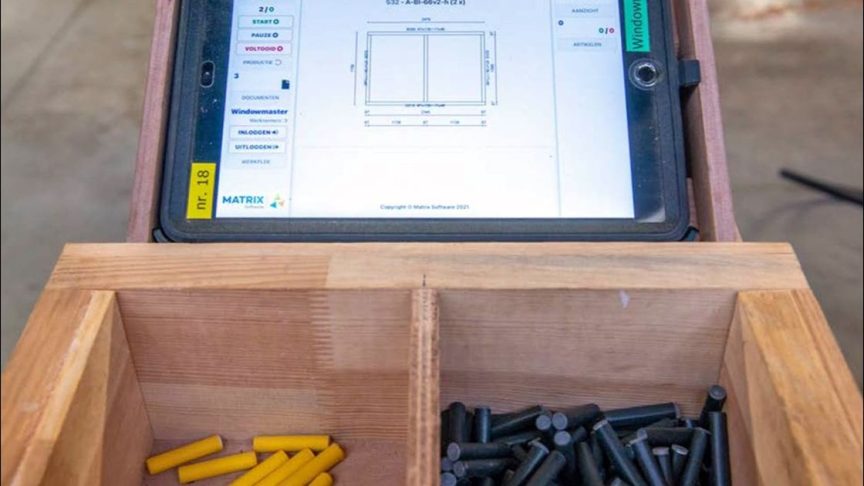 Van de Vin predicts it will save tens of thousands of euros, having replaced its paper-based manual tracking system with the automated capture of digital data.

When builders and homeowners require custom-made windows and frames, they typically have little room for delays. With that in mind, Van de Vin recently deployed an RFID-based solution to track its custom wooden window frames as they move through production.

The result, according to the company, has been a reduction in costs related to manually tracking orders and products on paper, the identification and prevention of errors, and an improvement in efficiency. The automated system leverages passive UHF RFID technology from U.K.- and Germany-based RFIDdirect, developed to operate reliably in the highly challenging environment of wood product assembly.

The company’s Timber UHF RFID Dowel tags are inserted into the end of each plank of wood, then are read at eight workstations via fixed readers embedded in the floor. Van de Vin’s manufacturing execution system (MES), provided by Matrix Software, manages the collected RFID read data and provides real-time updates and alerts based on production activities, as well as instructions for workers at each station on the production floor, specific to every frame. The solution was taken live at the end of 2021, and it has reportedly boosted the company’s efficiency and reduced its risk of errors.

Van de Vin manufactures wooden frames for the construction and renovation of houses and apartments. Its custom-made frames, produced in the Dutch town of Heeze, are sold as semi-finished products, or they can be sold ready to install—lacquered, glazed and prepared for the building for which they are destined. The tracking of orders can be a challenging task. Traditionally, the company used paper to manage orders manually, as well as a barcode sticker on each frame that could be scanned to identify a frame up to the point at which it was painted.

The company tried engraving the frame on the processing line with a unique ID number, but the identifier required that someone look up the engraved serial number, which proved cumbersome. To gain visibility with less manual intervention, Van de Vin sought a way to automatically track each wooden plank used in the manufacturing of frames.

But although RFID provides that automatic tracking functionality, it was a technological challenge for the woodworking company, according to Rudolph Den Boer, Van de Vin’s IT manager. RFID does not inherently transmit well in and around wood, he says, since timber is dense, with a high volume of liquid that obstructs RF signals.

The company had investigated RFID, Den Boer says, but found that the technology came up short of its expectations. The management “just played with access-control systems,” he recalls, “which proved to be inadequate for the product traceability.” Additionally, any identifier had to be long-lived—as much as 75 years, the frame’s typical lifespan.

The company took its challenge to RFIDdirect, which conducted its own field tests and suggested how to deploy the RFID tags. “They wanted to identify the individual products” to measure delivery performance and capture work-in-progress details, recalls Mohssine Ouchen, RFIDdirect’s business-development manager.