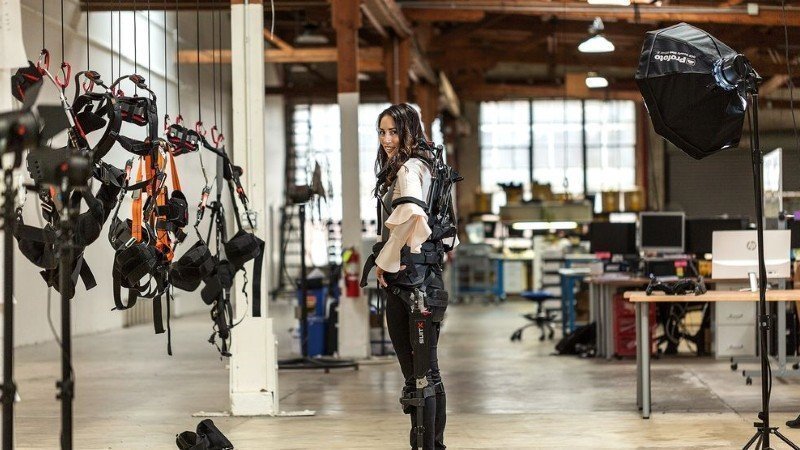 The front of SuitX’s East Bay headquarters is an empty room. No reception desk, no furniture — it’s about as unassuming as robotics office spaces get. For now, it’s a trial space, where perspective clients can try out the startup’s soft robotics exoskeletons in person, to see if they’ll fulfill their specific industrial or medical needs.

Through one door is the clinical room. It’s an all-white space that looks like some budget movie attempt at a doctor’s office. It’s here that we see a partially paralyzed man walk slowly, but determinedly, across the room, with the help of the Phoenix modular exoskeleton and a walker, as his wife looks on, beaming.

Through the other door is much closer to what you’d expect from such a company: a huge warehouse area that doubles as an office and testing space. Walk farther, and you’ll see the manufacturing area, where employees build devices on huge industrial machinery and package them up to send out.

The space is a bit smaller, but similar in look and feel to that of nearby Ekso Bionic. The fact that the startup’s chief competitor in the world of soft robotic exoskeletons is a mere 20-minute drive away is no coincidence, of course. The companies share roots in UC Berkeley’s Robotics and Human Engineering Laboratory — and a common co-founder, Homayoon Kazerooni, whose leadership has earned the department the affectionate nickname, the “Kaz-Lab.”

Like many startups in the robotics world, the lab’s exoskeleton work was developed for the benefit of the military. The creation of a lightweight, wearable robotic device could help soldiers relieve some of the strain of lugging giant packs long distances over rough terrain.

But Kazerooni’s work has ultimately proven useful for other facets of life. “The company started with four graduate students,” co-founder and VP of Engineering Wayne Tung told TechCrunch. “With Professor Kazerooni, that’s five co-founders. We worked on primarily the medical exoskeleton, and he convinced us to stay around to start this company together. It gradually evolved into industrial.”

“We really focused on simplicity, right from the beginning,” says Tung. “Driving the cost down, so more people can have access to these devices. If you have a really good device that costs $100,000, not a lot of people can have access to them. On the industrial side, we’re focusing primarily on back injuries, leg injuries and shoulder injuries with the BackX. It’s designed to support the weight of the user’s upper body and whatever weight he’s holding, transferring that weight to the legs, bypassing injury-prone back muscles”.

It’s these exoskeletons that are being explored for industrial and manufacturing applications. Consider a mill situation where workers are lugging around larger sections of timber. The opportunities start then to stack up.

Homayoon Kazerooni will be presenting at this year’s WoodTECH 2018 series that is running in Melbourne, Australia on the 11-12 September and then again in Rotorua, New Zealand on 18-19 September 2018. Full details on the programmes for each country and registrations can be made on the event website, www.woodtech.events