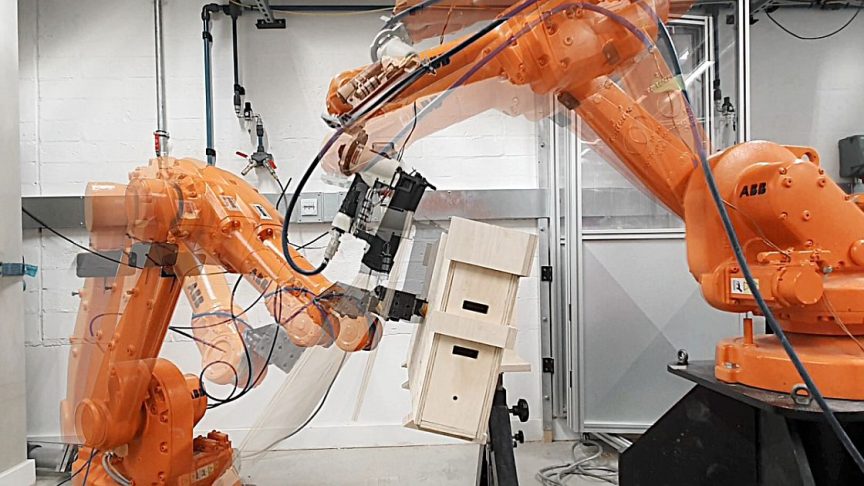 A team of post-graduate students from London’s Bartlett School of Architecture’s Design Computation Lab has created a modular home office to promote its automated architecture (AUAR) project, which involves the use of robotic fabrication. Dubbed ALIS (automated living system), the project features the construction of prefabricated plywood building blocks that join together to create indoor spaces, such as a children’s play room, home office or a co-working space.

The project was originally inspired to address a range of architectural issues, including access to affordable housing, limitations of material resources and the growing demand for home-offices and flexible working spaces. “ALIS is not to be interpreted as a final solution to the housing crisis, but as a tool to question assumed ‘truths’ about how we live – the home, ownership and social habits,” says the team of students.

ALIS is powered by an online app that allows users to customize or create different spaces depending on their needs, such as an art studio, bedroom, office or even a pop-up cafe. The concept is based on a single, repeating building block, which is prefabricated using CNC technology and assembly by two industrial robots.

The robots configure the blocks into the individual elements required to construct the walls and furnishings of the pre-designed space. The ALIS building blocks incorporate every element of the interior space, including meeting tables, load-bearing walls, flooring, storage, shelving and corner sofa bench.

The individual blocks are lightweight and can be easily installed without the need for special tools or building experience. Furthermore, the blocks themselves can be used as supports during the assembly process. The modular blocks can later be reconfigured and re-assembled for alternative uses over time.

In the future AUAR hopes to contribute to new construction models for automated housing. The team’s goal includes the involvement of local construction, community interaction and adaptation. AUAR also has plans to build an installation using the ALIS blocks on a site in Hackney Wick, London. The installation will double as a co-working office-space and community accelerator.

Source: AUAR via The Building Centre