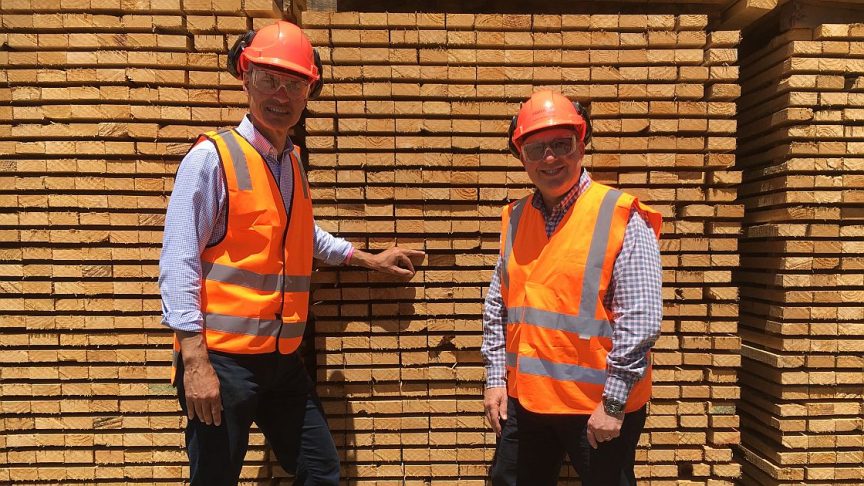 The installation of new state of the art Contra Flow Kilns (CFK), will cut down waiting times for drying timber, whilst decreasing heat power usage by 30%. A new Lucidyne grade scanner that uses state of the art AI technology to measure for strength, quality and defects in every piece of timber in real time has been installed in the planer mill. The system’s software learns with every photo that it takes, scanning up to two boards per second. This ensures that every piece of engineered structural timber meets the stringent Australian standards requirements whilst removing the need for manual intervention, creating a safer workplace for our people.

Minister Barnett was impressed with the efficiency gains provided by the new CFK and Lucidyne grade scanner, the first of its type in Australia. “This is a great example of Australian manufacturing in the 21st century, in Tasmania delivering improvements in energy usage and safety through technology”, Minister Barnett said.

A new automated packaging line that robotically places bearers under packs of timber has also been installed, which Ian Tyson explained will alleviate a bottleneck to improve efficiency and output. In addition, there have been upgrades to the roads network to separate heavy plant equipment from smaller vehicles. “This is a great outcome for improved safety, so our people go home safe, every day”, said Mr Tyson.

The latest round of investment in upgrading the Bell Bay mill created 90 jobs in the construction phase and crucially 6 new permanent full-time jobs. The investments also support the long-term future of the mill and the estimated 650 jobs that directly and indirectly rely on the mill. “This is a terrific investment in technology and equipment in regional Tasmania here at Bell Bay, in a facility which is state of the art, that is value adding, downstream processing, creating jobs and it’s sustainable” said Minister Barnett.

Mr Tyson added, “Timberlink has continuously invested in this mill to ensure it remains internationally competitive since taking ownership in 2013, while growing and securing employment within the Northern Tasmanian region. We are well positioned for continued growth and look forward to further investments in 2020.”