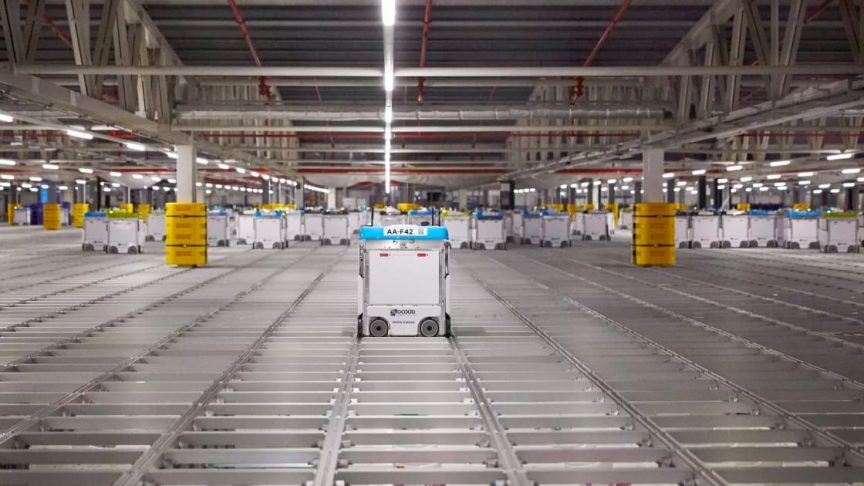 They call it “the hive,” or “the grid.” Or sometimes just: “the machine.” It’s a huge structure that fills a warehouse on the outskirts of Andover, a small and quiet town in southeast England. It’s impossible to take in at a single glance, but standing on a maintenance walkway near the building’s rafters, you look over what seems to be a huge chessboard, populated entirely by robots. There are more than a thousand of them, each the size and shape of a washing machine, and they wheel about, night and day, moving groceries. Their job is to be cheaper and more efficient than humans, and they are very good at it.

The hive-grid-machine is the creation of Ocado, a British online-only supermarket that’s made a name for itself in recent years designing highly automated warehouses and selling the tech to other grocery chains. When fully up and running, Ocado’s Andover operation will be its most advanced yet, processing 3.5 million items or around 65,000 orders every week. It’s also a perfect example of the wave of automation slowly hitting countries around the world. The tasks being undertaken by Ocado’s bots are so basic they’re best described by simple verbs — “lifting,” “moving,” “sorting” — and that means they exist in various forms in a range of industries. And when the price is right, someone will want a machine to do those jobs, too.

Source and image credit: The Verge

Blenheim sawmill to close by end of the year

Businesses must ensure machines are guarded to highest standard