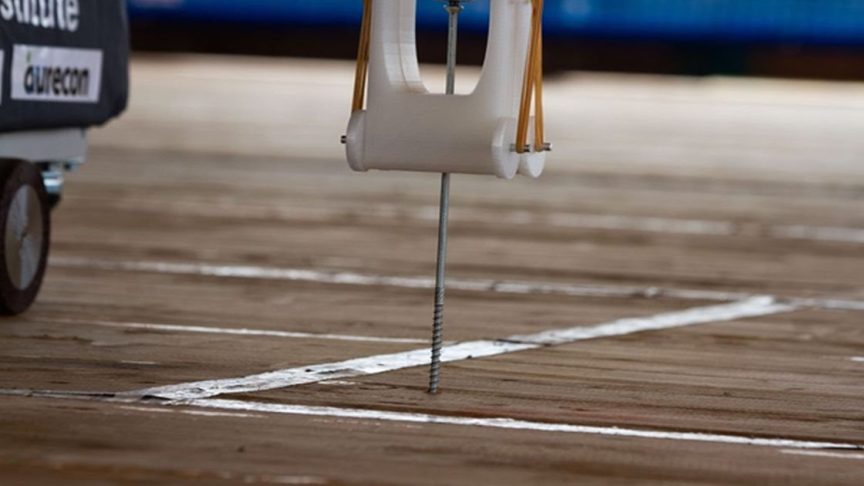 Large mass-engineered timber construction projects require placing hundreds of thousands of screw fixtures. A new collaboration sees a robot do the hard work.At the Murdoch University campus in Perth, a new mass-engineered timber (MET) building is being erected. The project will be Western Australia’s largest MET building, but that is not what was attracting attention to the building site one day this past May.

The reason for the television news cameras, the careful safety precautions, the interested labourers debating whether they could work faster than the new hire, dated from a conversation Pratik Shrestha CPEng, the Aurecon structural engineer leading the project, had a few years earlier.

“We were throwing random ideas out and we said, ‘Wouldn’t it be cool if there were robots on site?’” Shrestha recalls. It was a “blue-sky idea”, he admits, but one that Aurecon wanted to see if it could turn into a reality.

“One of the things that we do at Aurecon is we have quite good relationships with other universities,” Shrestha tells create. “So, we said, well, let’s do a matchmaking exercise to bring in University of Technology Sydney [UTS] – who are world leaders in robotics – partner them with Murdoch University and ourselves, and let’s … see where this goes.”

The end result was that trial run of a custom-designed robot built to deliver screw fixings on the construction site. A robot designed by Aurecon and UTS inserts a scew on-site. The entire building at Murdoch University would require 200,000 to 300,000 of the screws, but on this day, the robot was tasked with affixing 50 to 100 of them as a demonstration it could do the job.

“Everything ran very smoothly,” Shrestha says. “We had done sufficient testing in a lab environment that when we got to site, there were no glitches.” The task is an ideal one for robots: the screws are cumbersome and numerous, and inserting them is repetitive.

“The screws that we’re installing aren’t just your Bunnings screws that you get for your house decking,” Shrestha clarifies. “These are 300 to 400 mm long screws; they’re as long as your fingertip to your elbow.” The fact that the Murdoch University project used MET made it ideal to develop a robot that could take on some of the work. Shrestha compares MET to a “giant Ikea set”.

“It’s highly prefabricated and it essentially comes in a flat-pack box; can we use robotics somewhere to be able to build it?” he says. “So then we worked with UTS to develop that idea. The robotics specialist development itself, that was all UTS, but we were highly involved in conceptualising the robot in terms of what it had to do, how it had to perform.”