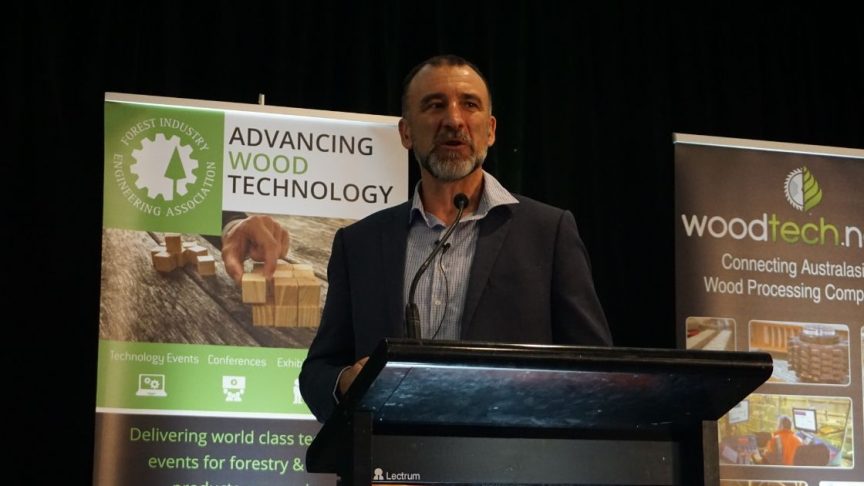 Robots are likely to have a bigger role in timber processing as they take over work that is dirty, dangerous or difficult. By Philip Hopkins for Timberbiz

That was a key message of Troy Krogh, regional director of Scott Automation & Robotics, to the WoodTech conference in Melbourne last week. The conference is held annually by the Forest Industry Engineering Association and features many exhibitors.

Mr Krogh said ‘Will robots take my job?’ was a common question by adults as they contemplate what their children are going to do in life.

“I look at it simply – the three Ds – Dirty, Dangerous or Difficult. If the work gets into one of those categories – no one wants to do that! That’s the low-hanging fruit for automation,” he said. “Get people out of the dirty dangerous environment – get them in to better quality roles.” This could apply to any type of work in any sector, be it food service or manufacturing.

“We started as automotive and general engineers, but are that no longer. We reinvent ourselves,” he said.

In World War II, the company manufactured munitions but had adapted to the environment, doing a different form of engineering – high tech products.

“You need to be fast and adaptable, in Australia and New Zealand, otherwise you are crunched by the big guys in the world,” he said.

The company, with 750 employees, has expanded from Australia and NZ to other countries, having become a diversified business with multiple clients.

In the timber industry, Mr Krogh said Scott had developed BladeStop, which stopped people cutting off fingers on blade saws.

The blade mechanically stops when the unit senses that a person has come in contact with the blade. Upon sensing contact, the blade stops operating within 0.009 seconds.

“It took 10 years to develop, and is sold all across the world – a premium product, a big success story,” he said.

Mr Krogh said handling materials was increasingly done by robots, as stacking different products such as scaffolding was not too different to stacking timber.

“You use the existing system to track the size of pieces coming through. Sorting and stacking in one process reduces your footprint considerably,” he said.

Another new area was Automated Guided Vehicles, which can carry heavy loads. They were given tasks to go from one point to another.

“They can program to be adapted; the technologies can move around an obstruction, for example, using adaptive navigation. It follows a path to one area, where it can be loaded again and off to production,” he said. “That vehicle could be any sort of vehicle – large or small forklifts.”