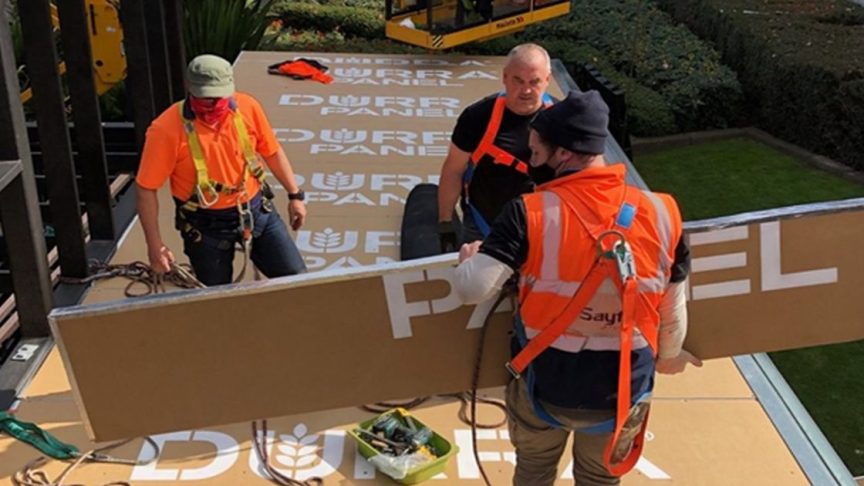 The Durra Panel has been used in some of Australia’s largest commercial undertakings and the company behind the ultra-sustainable product says the residential construction industry is rapidly catching on too.

On its website, Ortech Industries labels itself “manufacturer of the world’s most sustainable building material.” It’s a lofty claim but also not easy to dispute.

Featuring a core made entirely out of reclaimed wheat and rice straw the panels are 100 per cent recyclable and biodegradable, as well as being highly fire resistant and locally produced in the Victorian regional city of Bendigo.

Coming in a range of finishes they are commonly used as wall and ceiling panels for large stadiums and auditoriums due to their sound-absorbing acoustic qualities. Just some of the projects that have made use of the panels are Sydney’s ICC, Margaret Court Arena, Melbourne Convention Centre, Perth Arena, Auckland’s Life Church and even Village Roadshow’s immense sound studio in Queensland.

Ortech general manager Ainslee Haslemore said that while commercial projects were the “bread and butter” of the company, residential enquiries were on the rise, particularly over the past 12 months.

While there are other compressed straw panel products on the market, Haslemore said her company’s manufacturing process was unique, using heat and pressure to form a solid core, which draws out a natural binding polymer from the straw. This means no additional chemical binding agents, glues or resins are used, aside from a water based PVA glue to cover the panel in recycled Kraft liner paper.

Growing popularity for the material over the past year has coincided with another materials shortage in Australia, this time caused by the pandemic. The company is using this momentum to promote the panels and undertake more marketing than they ever have in the past.

Ortech already employs 35 people and is looking to hire a further six as the company expands and rolls out a modular building branch of the business called Placeit, which inserts the Durra Panels into a prefabricated steel frame for better efficiency during the construction phase.