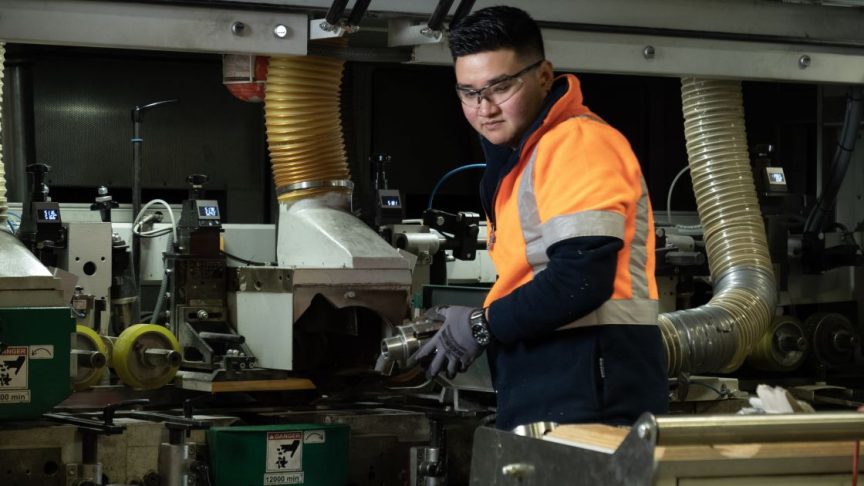 MLC, a New Zealand manufacturing company currently has two staff members who started an apprenticeship programme in timber machining. In this article, we take a look at the career path of the two employees and how they have got to where they are within the company.

Simon Williams-Fry, one of the company’s first trained machinists who completed his apprenticeship over a decade ago, who has now become production manager at MLC Group.

Simon started with MLC in 2005 working on a cross-cut saw docking timber to length. Back then, it was a labour-intensive manual process, a far cry from the automation he has since helped put in place at MLC. He progressed to the finger-jointing plant, then to the planer starting with feeding timber in, to eventually running the machine. His diligence earned him an apprenticeship in timber machining.

While he was training as a machinist, he realised that there was some magic in taking a piece of sawn low-value timber and turning it into something that not only looks amazing but increases the value of the timber.

After nine years machining, Simon left MLC for an overseas adventure, getting a job in the gold mines in Mongolia. “It was an eye-opener”. Simon worked 8 months with no days off. Gold mining made him realise what we take for granted in New Zealand, particularly the way employees are treated.

While Simon was away, he stayed in touch with the factory manager at MLC Group, who offered him a job as a head machinist if he was to come home. Simon saw this as an opportunity to learn more about leadership, to use his experience with machinery to train people, but also to use what he’d learned in Mongolia about how not to treat people.

Simon initially managed a team of 15. His role now involves helping other people run the factory, assisting 30 plus staff and helping train other leaders to run the factory and manage staff.

The second MLC apprentice is Benje Tonzier (pictured). Benji’s positive disposition is part of the reason he has worked his way up at MLC from factory labourer to team leader. He is one of our timber machinists who will complete his 4-year apprenticeship by early 2021.

When Benji was 17 his mother and her kiwi husband emigrated to New Zealand. They lived in Granity on the West Coast before relocating to Motueka. Benji started a job at MLC as a labourer, gaining experience in several roles in the factory yet the turning point for Benji was when he started working on the planer. He liked seeing timber come out of the machines in what are often complex moulding profiles.

He became involved in setting up of the planer, helping with the scheduling of the different profiles and took an interest in the tool room where the knives used in the machines are prepared. His enthusiasm and quickness to adapt to the role got the attention of the factory management team and he was approached see if he would consider in an apprenticeship in machining. It was a natural progression for Benji, and he has embraced the opportunity, not only as a machinist but he is starting to lead a team, training staff and passing on the skills he has acquired.