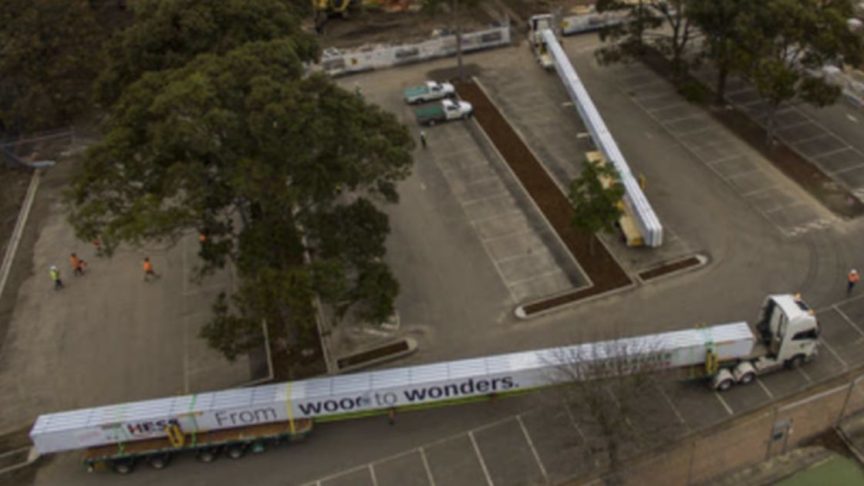 The City of Mount Gambier claims the longest single glulam timber beams ever shipped to Australia – spanning up to 42 metres – were recently loaded on to two trucks. The heavy vehicles made the journey from the wharf in Port Melbourne to the Wulanda Recreation and Convention Centre construction site on Margaret Street in Mount Gambier on 22 June 2021.

Thirteen full length glued laminated timber beams measuring 42 metres and two segmented beams were produced by German timber engineering project specialist, Hess Timber, the pool hall within the AU$57.3 million Wulanda development. The single large timber spans required for the roof meant the European Spruce product was sourced from overseas as the length was unable to be manufactured in Australia.

“Understanding the nature of the use of the facility, and what it means to the community over a number of generations, our priority was ensuring longevity of the build that would ultimately reduce long-term maintenance costs,” said BADGE Senior Construction Manager Mark Wyatt.

“This particular product was selected as it will not require joins, given its length will span the roof. Those joins are where moisture and chemicals from an aquatic environment can begin to damage structure over years of use, as would any plain timber product,” he said. The timber rafters were crafted at Hess Timber’s production facility in Kleinheubach, Germany.

A specialist freight contractor used two mobile hydraulic cranes to unload the beams from the ocean freight platforms and on to each truck which carried three to four timber beams each over four loads. “The truck consists of a prime mover at the front with a separated steerable jinker at the rear,” said Hess Timber Business Development and Projects Manager Tyson Infanti.

“The beams themselves span the void between the two vehicles and act as the trucks middle section,” he said – adding there are two multi-purpose bogies that carry four individual loads to the site.” The long and oversized loads measured 2.5 metres wide and 49 metres in length.