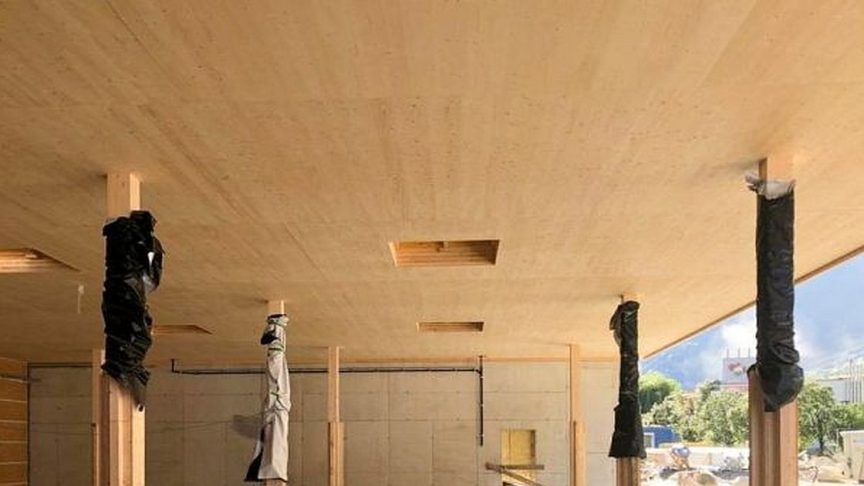 In the Austrian province of Vorarlberg, a timber construction is currently being built with a 650m2 cross laminated timber panel. That is a world record! The TS3 technology makes it possible – a development by Timbatec together with the ETH Zurich and the Bern University of Applied Sciences.

TS3 technology is a quantum leap: it frees timber construction from its small structures and makes it a real alternative to conventional reinforced concrete. TS3 is a process that can generate large areas from wood – without the previously used beams. These large surfaces can replace reinforced concrete in most areas.

TS3 connects wooden components at the front. This was considered impossible for decades. Ten years of research by Timbatec, together with the ETH Zurich and the Bern University of Applied Sciences, were necessary to find the solution: A process using a two-component polyurethane casting resin. This resin joins the wooden elements rigidly together.

In the Handl project in Vorarlberg, Austria, the panel faces were pre-treated with the TS3 special primer at Binder’s CLT plant in Unternberg and immediately afterwards provided with sealing and segmenting strips. The 3.5 metre wide slabs, some of which weighed over five tonnes, were loaded just in time and driven directly to the construction site in Pians in an escort vehicle.

The cross laminated timber boards are placed on the wooden supports with a grid of 7 x 7 metres. For the assembly, an additional empty scaffolding was also created. Thus, an application technician can seal the joints with the two-component adhesive, which was specially developed for TS3. After only a few days, the scaffolding could be removed again. The result was the largest CLT panel in the world.