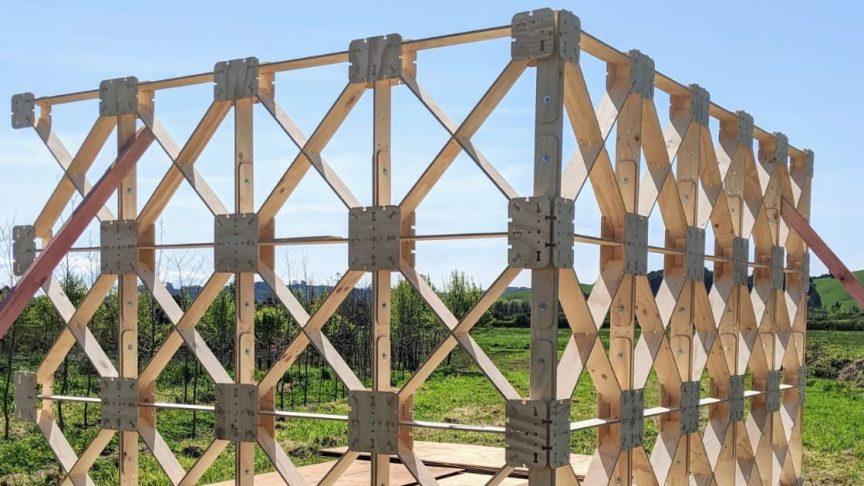 Victoria University of Wellington PhD candidate Ged Finch is fast tracking the commercialisation of his X-Frame structural frame solution for waste free buildings with support from the KiwiNet Emerging Innovator Programme. The game-changing framing system can be disassembled and re-used at the end of a building’s useful life.

Finch’s design, a self-braced interlocking wood design which clips together eliminating the need for single-use fixings, has the potential to eliminate waste and reduce the amount of raw materials being used by the building industry. Approximately half of all New Zealand’s waste—about 1.6 million tonnes every year—is generated by the construction sector.

“The current widespread use of adhesive-based fixings and single-life materials means that building a single new home will create about four tonnes of waste during construction, and even more when it’s eventually demolished and taken to the landfill,” says Finch. Finch, who has been working with Viclink, Victoria University of Wellington’s commercialisation office, also secured a place on KiwiNet’s Emerging Innovator programme to help commercialise the green architectural solution.

Every single component of Finch’s X-Frame design, cut by a computer-controlled router, can be disassembled and reused, so no waste is produced at any stage of a building’s lifecycle. The clip-together design allows any type of structure—floors, walls, ceilings—to be rapidly assembled and disassembled many times over, using unskilled labour and a bare minimum of tools, akin to flat-pack furniture. Adding doors or windows at a later stage is simple, and when kids leave home: “they could literally take their rooms with them, as our modular design also clips onto standard framing.”

Dr James Hutchinson, CEO of KiwiNet, says: “Ged’s vision is to transition the building sector from a linear (take, make, dispose) economy to a circular economy—where materials are reused in endless cycles. His approach could set a new benchmark for sustainable design, and it makes great commercial sense. KiwiNet’s Investment Committee saw an opportunity to support Ged with expertise, networks and funding to do specialised work required to demonstrate his ideas at scale, and to assist with the commercialisation pathway from concept to new architectural solution.”

Finch is currently building a small (10m2) prefabricated prototype dwelling in Auckland to demonstrate his ideas at scale and to inform market viability. He believes the completed prototype will be New Zealand’s most sophisticated ‘circular’ building.

Finch says, “This prototype build is a major step as it is the first time we will have built the entire wall system with cladding, cavity battens, insulation and an internal lining. Unitec Institute of Technology’s School of Architecture have helped out by providing robotic fabrication facilities to create the frame – which means we’ll be able to have the entire building water-tight in less than one week on-site. We’re cladding the assembled X-Frame in an entirely reusable, chemical free external cladding system centered around a naturally preserved timber product being developed by Abodo Wood Ltd.”